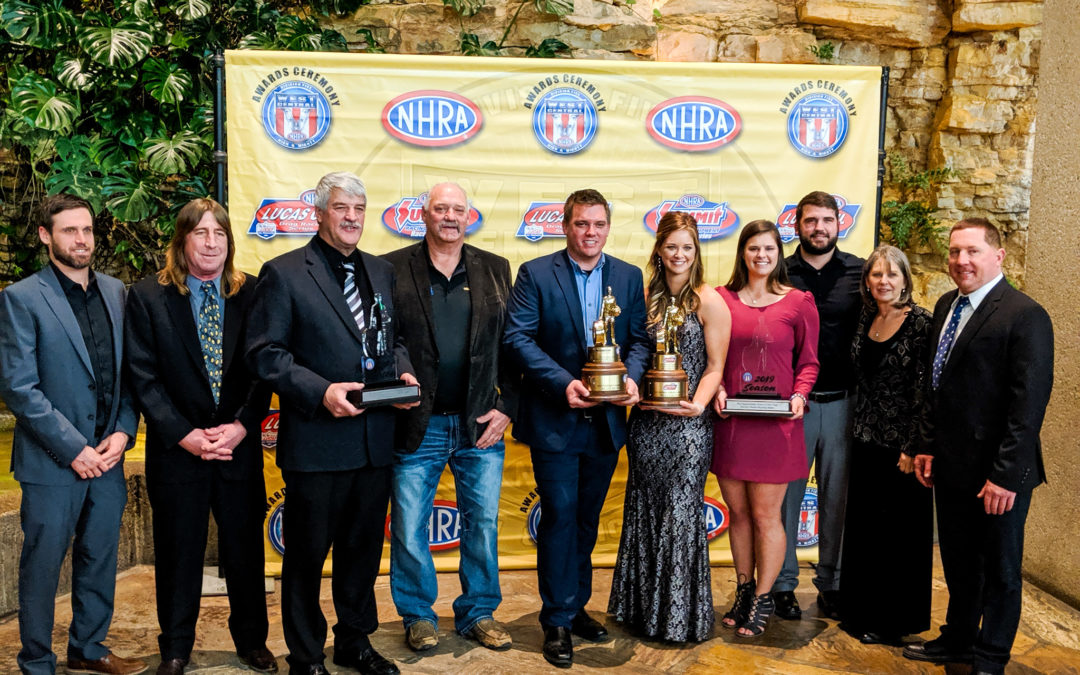 This past weekend, the Kansas-based Randy Meyer Racing Team attended the annual Lucas Oil Drag Racing Series Central Region awards ceremony in Kansas City, Missouri. Joining 28 other stars, ranging in ages from 6 years old to over 60, Megan Meyer was inducted into the Top Alcohol Dragster class’s list of champions for her third straight Central Region championship for the 2019 season.

In addition to collecting her championship Wally, jacket, and winnings, Megan was awarded the Pro-Sportsman driver of the year award. This is Megan’s fourth consecutive year for being nominated and winning the prestigious title. Rachel Meyer, Randy’s youngest daughter, also collected her winnings for her 2019 second place finish in the Central region, improving on her third place finish in 2018.

Julie Nataas, driver of the Dot’s Pretzels dragster for Randy Meyer, won the 2019 North Central Regional championship, as well as the Pro-Sportsman driver of the year award for the first time.

The Randy Meyer Racing Team also collected the Pro-Sportsman Crew of the Year award for both Central and North-Central regions for their 2019 success. “This weekend we celebrate all of the champions and those who make it possible for them,” said Megan. “Trust is the core value of each team, and I wouldn’t hop into my NGK Spark Plugs dragster if I didn’t trust my family and my guys to put it back together correctly after each pass. We have such a great group of men and women that have been with us for years. They have watched Rachel and I grow up from Junior Dragsters, to Super Comp, and now Top Alcohol Dragster. I am thankful for each and every one of them, and of course I am grateful for my sister and parents who I get to race with.

“It is an honor to be awarded the driver and crew of the year awards again. There are so many great families in both Top Alcohol Dragster and Funny Car classes that we race against who deserve this award as well.

“On behalf of the Randy Meyer Racing Team, we would like to first thank NGK Spark Plugs for supporting me in the last two years, and they will be back for 2020. Lucas Oil, Weld Wheels, Aeromotive Fuel Systems, Menards, Dot’s Pretzels, Gunk, Technician.Academy, and more join our roster of amazing companies that make our team complete. 2019 was our 40th year of drag racing, and it was the most successful for my career and for our entire team. I know we are going to fly in 2020 and have a great time defending our titles.”